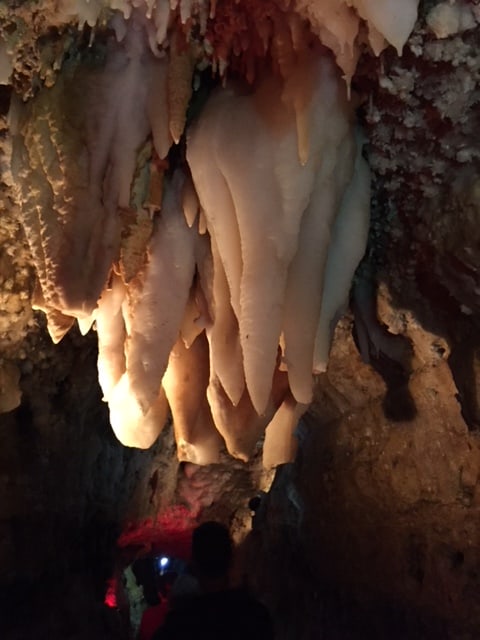 Discovering the Difference Between Caverns and Caves

After sharing the free adventures I found in Dubuque as well as the two museums I explored, it’s time to share my Crystal Lake cave adventure and a few things I learned along the way.

In the first Dubuque post, I talked of how experiences break the stereotypes I hold of different places. In Iowa, I said I expected cornfields and farmers. And, to be sure, there are a lot of cornfields and, presumably, farmers though I didn’t meet a one. But when I think of farmland, I think flat land. So it was lovely to discover Iowa is filled with rolling hills. Because it was the middle of summer, they were rolling green hills. It was a beautiful state. 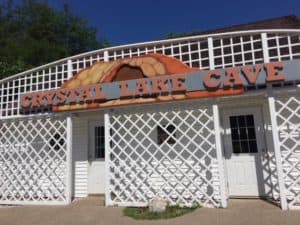 Crystal Lake Cave entrance to gift shop , ticket purchase plus the door where you start the tour is behind the counter.

Getting to the Crystal Lake Cave takes you on the above-mentioned rolling hills. The attraction isn’t far outside of Dubuque and does have a Dubuque address. South of town, it took me about 20 minutes to get there from my RV park in west Dubuque.

When I found the Crystal Lake Caves on the list of things to do in Dubuque, I knew I had to visit. If for no other reason than to compare it to my experience in Northern Alabama when I visited the Cathedral Caverns.

High on the list of comparisons? What the heck is the difference between caves and caverns? I didn’t find the answer out on the tour so I looked it up after. Every reference I read said that, though they are different, people use them interchangeably.

A cave is any cavity in the ground that is large enough that some portion of it will not receive direct sunlight. There are many types of caves. A cavern is a specific type of cave, naturally formed in soluble rock with the ability to grow speleothems. So, although a cavern can accurately be called a cave (since it is a type of cave), all caves cannot be called caverns. Speleothem: the scientific term for a cavern formation. It comes from the Greek words “spelaion” meaning cave and “therma” meaning deposit.

There are many types of speleothems including stalactites, stalagmites and columns. I saw all three in Alabama and at the Crystal Lake Cave. This means Crystal Lake Cave is more specifically a cavern. But in all fairness, as the definition above points out, caverns can accurately be called a cave.

Occasionally, you see stalactites with a hook on the end. I didn’t see them in Alabama but there were quite a few in Iowa. The tour guide at Crystal Lake Caves called them Cave Curly Fries. Scientists are unsure what causes them not to follow gravity. What’s interesting is that you spot them here and there among the straight icicle-like stalactites.

The man credited with discovering the caves came in with miners looking for lead in 1868. The miners drilled 40 feet into the ground but found very little lead. Instead, they found the caverns. In 1932, one of the original miners, Bernard Markus, opened the caverns to the public.

Can you see the upside down goose? It’s to the right of the sign.

The tunnels through the cave twist and turn and, in several places, fork. On the tour, at the deepest place, we were 100 feet underground. A total of 2.5 miles of tunnels have been explored and there is some certainty that other tunnels exist but remain undiscovered.

The tour is three-quarters of a mile long. In places it is quite narrow and in others it is quite low. This may not be an adventure for those with claustrophobic tendencies. I never felt nervous. I was with a large group plus in the middle so there were a lot of people in front of me and a lot of people behind me. But I could see how someone with claustrophobia might struggle on the tour.

The cave maintains an even temperature year-round of 50 degrees Fahrenheit. It doesn’t matter if it’s 90 degrees outside or 9 degrees, the cave temperature will be a cool 50. That was true, too, in Alabama which makes me wonder if this is common to all caves and caverns.

The Ostrich with his head in the sand.

I guess I’ll have to explore more of them to find out.

Most of the formations are named after animals or Biblical references. The one called Lot’s Wife made me chuckle. Obviously, it looked like a pillar of salt. One of the exceptions to this is the formation called The Chandelier (the feature photo of the post).

I must confess there were one or two formations where I just could not see the name. One was a dragon. I even asked someone near me to point it out and I still didn’t see it.

Toward the end of the tour, there is a tiny room off to one side that you can step into, called the Cathedral Room. And, get this. There has been a wedding or two in the tiny space.

It would be wise to take a small flashlight. The tour guide shared his for the things he pointed out. But other cool hidey-holes and crevasses worthy of a look were not lit. I got lucky. The man in front of me shared his with me. I hope I remember this tidbit when next I find a cave/cavern tour.

Stalactites plunging from the cavern ceiling.

At Crystal Lake Cave, there are picnic tables. If you want a fuller adventure, you could bring lunch to enjoy.

Currently, they are having some technical difficulties so the website is down so I didn’t include a link. But information about the cave is available on general Dubuque tourist sites.

Finally, in writing this, I have realized something. I suck at predicting how many posts I’ll write on Supersize Adventure location. I predicted two posts for Fredericksburg, Texas. But I wrote three. I predicted three posts for Middle Tennessee but wrote five. Now, I’ve gone and done it again. I was so sure I had it right this time. Three posts for Dubuque.

It’s going to take four to get the job done. From here forward, I stop predicting how many posts it will take to share my adventures about a particular place.

What does it mean? It means come back next week to read about how 30 years ago Hollywood arrived at an Iowa cornfield to shoot a movie that would go on to be nominated for an Oscar for Best Picture.

Links to Referenced SSL Posts Above

To see products recently purchased by readers or to browse and shop at Amazon, follow either of these links. Huge thanks for your support. 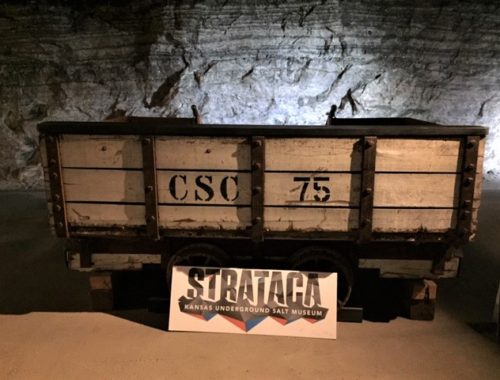 Strataca Salt Mine and Other Slow Travel Adventures 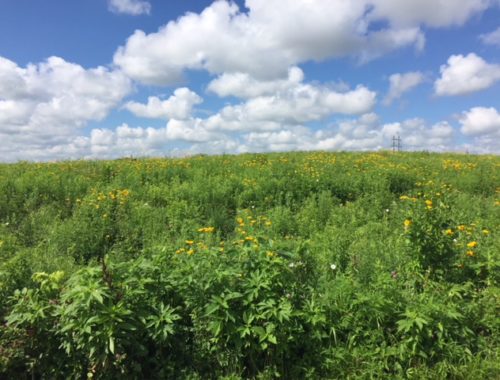 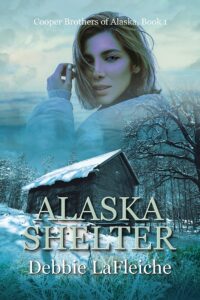 To Purchase an E-book or Paperback on Amazon

Item I Love for Flu Season

This website uses cookies to improve your experience while you navigate through the website. Out of these, the cookies that are categorized as necessary are stored on your browser as they are essential for the working of basic functionalities of the website. We also use third-party cookies that help us analyze and understand how you use this website. These cookies will be stored in your browser only with your consent. You also have the option to opt-out of these cookies. But opting out of some of these cookies may affect your browsing experience.
Necessary Always Enabled
Necessary cookies are absolutely essential for the website to function properly. This category only includes cookies that ensures basic functionalities and security features of the website. These cookies do not store any personal information.
Non-necessary
Any cookies that may not be particularly necessary for the website to function and is used specifically to collect user personal data via analytics, ads, other embedded contents are termed as non-necessary cookies. It is mandatory to procure user consent prior to running these cookies on your website.
SAVE & ACCEPT